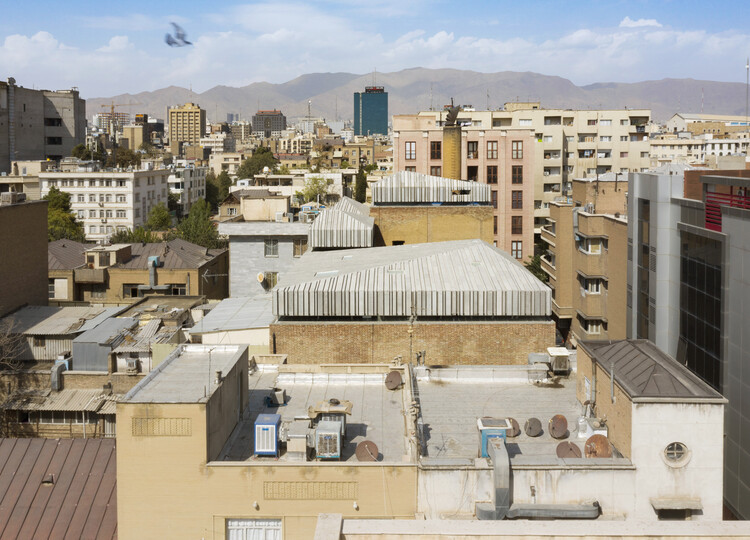 The design began with the insertion of new structural foundations, while retaining the expressive exposed brick load-bearing walls. Five pitched concrete roof structures, fashioned in the historic vernacular of neighboring rooftops, float 50cm above the existing walls, creating architectural “caps” for the air-conditioned galleries above the once exposed upper level. Diffuse sunlight penetrates through the separation between old and new, illuminating vast galleries 8.5 meters high.

The old cellars in the basement have been transformed into galleries below and a brand new isolated L-shaped exhibition space for the permanent collection is now located in the basement. A new 70 square meter capsule tower located on a narrow footprint at the south end of the factory, clad in various strata of cast-in-place concrete, houses space for artists in residence.

Led by Iranian-Austrian architect Ahmadreza Schricker, founder of ASA North, in partnership with Hobgood Architects, who participated in the design phase of the project (led by Patrick Hobgood), the transformation of Argo Factory into a museum offers a net increase of approximately 85% to the original spaces (from 480 m2 to 1,890 m2) and has three distinct event spaces: (A) a large capacity auditorium, equipped for film screening and forums, (B ) an intimate penthouse-level observatory, with panoramic views of Tehran and (C) a large, curved transitional staircase – another seemingly floating insertion into the existing structure – which creates a monumental connection between the lobby and the modern galleries above .

The new underlying structure, designed by structural engineer Behrang Bani Adam, allows the architectural expression to maintain a restrained conversation between the old metal roofs (halabi) of houses in Tehran and the new floating (concrete) roofs. of the museum which are the only new addition to the exterior form of the original factory. The design taps into the DNA of traditional local metal roofs and rewrites them into five performative floating roofs: each considering an unrehearsed lighting atmosphere, for the cultural program below.

Argo Factory is the first private contemporary art museum to be built in Tehran since the 1979 Iranian Revolution and is also one of the first venues to feature more flexible spatial opportunities for artists – with more varied ceiling heights ranging up to 15 meters. The Argo factory has become one of the main cultural centers of the city and also attracts international visitors. It has been cited as a catalyst for the renovation of nearby structures, boosting the cultural revitalization of downtown Tehran.