Galleries and museums have been warned to be on high alert for copycat attacks on artworks as environmental activists secretly pledge to ‘step up’ action.

Tourist attractions are believed to have tightened their security measures after two Just Stop Oil activists threw Heinz tomato soup at Van Gogh’s masterpiece Sunflowers at the National Gallery this month. It was protected against lasting damage by a glass screen.

But there was no indication that the National Gallery had tightened its controls when a Daily Mail reporter visited this week.

An airport-style metal detector did not sound an alert when the reporter entered the building with a bag containing a metal water bottle.

And security staff didn’t look past the top layer of the bag, meaning a can of tomato soup could have easily been concealed.

There were staff members in several rooms, including at the entrance to room 43 – which houses works by Matisse, Picasso and Van Gogh.

However, the reporter was able to stand within contact distance of the Sunflowers – again exposed after cleaning – and remove the vial from the backpack without being approached.

There was an equally aloof approach to security at the Tate Modern and the Victoria and Albert Museum in central London – neither of which questioned our reporter’s backpack with vigor during visits last week. 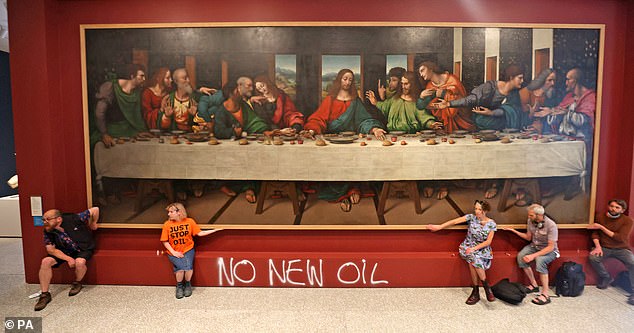 Last week, senior Just Stop Oil executives privately planned to step up and said damaging artwork would be ‘proportionate’. Pictured: Protesters stick their hands to the frame of Leonardo da Vinci’s The Last Supper on July 5

The multi-million pound Sunflowers – considered the National Gallery’s most popular work of art – were behind a protective glass screen when hit.

One insisted: “Actions are being stepped up. Property damage will occur.

Art experts today said there was a balance to be struck between public enjoyment and safety, but publicity around the Sunflowers waterfall will have worried gallery heads.

How do museums protect their exhibits?

Museums and galleries use various methods to protect their valuable exhibits from various damages.

When two Just Stop Oil protesters threw tomato soup at the National Gallery’s flagship exhibition – Van Gogh’s Sunflowers – staff could have cleaned it up with a dishcloth and put it back on display shortly afterwards.

The paint is protected by an ultra-thin piece of glass, which means the soup can be wiped clean.

In fact, many museums around the world use a special plastic called plexiglass to stop all sorts of unwanted intrusions.

The specialized preservative material provides increased protection from sunlight, reduces glare and prevents insects from depositing feces which can cause serious damage, especially to paper.

Some masterpieces, however, command an extra layer of security.

This includes at the Louvre, in Paris, where Leonardo da Vinci’s Mona Lisa is protected by both a physical barrier and bulletproof glass.

David Dallas, Managing Director of Doerr Dallas Valuations in Surrey, said: “The National Gallery is aware of the wild protests against copycats.

“But the reality is you just can’t budget for them. We can’t really protect everything against all eventualities.

“Most people have good intentions, and so security is usually not really thorough, as the queues to get in would be huge and there would be endless complaints.

“You have to find a balance between accessibility and image security, which is not easy.

He said: “Of course art galleries and museums of all sizes will now be on high alert in case someone randomly throws something at a painting or artwork.”

“Many art galleries, due to high energy costs, are already struggling to stay open; the added cost of security will be the last nail in the coffin for many and some will close; people lose their jobs.

“There are no winners in this kind of random action. It will rob people of the pleasure of seeing and understanding the art that has been created to tell important stories and struggles, struggles that continue until ‘Nowadays when this winter, some people will be heading to galleries and museums just to warm up.

“A great irony of these protests is that they are being filmed on smartphones made in China, one of the biggest oil consumers in the world. There is a cascade to these actions. It is not without victims.

The National Gallery spokesperson said: ‘We are constantly monitoring our security arrangements.

“However, we do not publicly discuss our security, as that in itself would compromise our security.”

Two protesters will stand trial for the Sunflowers incident in December.

How treasures are protected

Museums and galleries use a range of methods to protect prized exhibits.

When Just Stop Oil protesters threw tomato soup at Sunflowers – protected by a thin glass screen – staff reportedly cleaned it up with paper towels and put it back on display shortly afterwards.

Many museums around the world use a special plastic called plexiglass to protect treasures.

The material provides protection from sunlight, reduces reflection and prevents insects from depositing feces which can cause serious damage.

However, some masterpieces command an extra layer of security.

The Mona Lisa is protected by bulletproof glass at the Louvre in Paris where visitors are prevented from approaching the painting by a wooden barrier.