Come Fly with Me: Jesse Arms Botke at the Laguna Art Museum

A magnificent 26-foot-wide mural adorns the Laguna Museum of Art’s exhibit of the works of 20th-century artist Jesse Arms Botke. His “Untitled East Wall Mural”, an oil on canvas with gold leaf, depicts a tropical paradise with flamingos, pelicans, herons and other birds, amidst colorful foliage and flowers. .

Looking at this iconic mural, Jean Stern, Director Emeritus of the Irvine Museum, shared a heartwarming story about its creation and rescue. Botke (1883-1971) painted the mural in 1955 for the Oaks Hotel in Ojai. Installed in the hotel lobby, the mural has suffered damage over the years due to occasional contact with passers-by.

In 1996, the hotel removed the mural and it was donated to the Irvine Museum shortly thereafter. After several months of detailed restoration, including the reinstallation of the gold leaf, the mural was delivered to the museum. But since the fledgling venue was then located on the 12th floor of an office building, the rolled-up mural was too big for the elevator, and it was temporarily installed in a venue at UC Irvine. Soon after, the museum was moved to the ground floor, and the mural was subsequently displayed there in three exhibitions where it became a major attraction, especially to children who often counted the number of birds. inside.

As the centerpiece of the Laguna Art Museum’s current Botke exhibit, the untitled mural reveals what Stern calls an intent to dazzle the eye with lines, shapes, details, colors, l elegance and patterned and stylized shapes.

More than two dozen Botke paintings on display in the museum’s front gallery complement and enhance the mural. These include ‘Crowned Pigeons’, a detailed illustration of three large blue birds, proudly wearing crowns of feathers. “Macaw & Cockatoos” features four white cockatoos surrounding a bold macaw as it spreads its wings. “Untitled Flamingos” is a riot of pink birds spreading their wings, while the flowers around them reflect their colors. “Cockatoos and Easter Lily Vine” features exceptional detail of bird wings and feathers as well as flowers and foliage that seem to burst from the canvas. And the majestic “White-naped Cranes” in dark gray provide a counterpoint to the colorful paintings. Other birds in his work and in this show include peacocks, ducks, swans, geese, pheasants and toucans.

Visiting the gallery at the Laguna Art Museum, seeing so many finely crafted bird paintings, can feel like a quick trip to the Everglades. Spend enough time there and you can almost hear the tropical birds cooing, singing and dining. 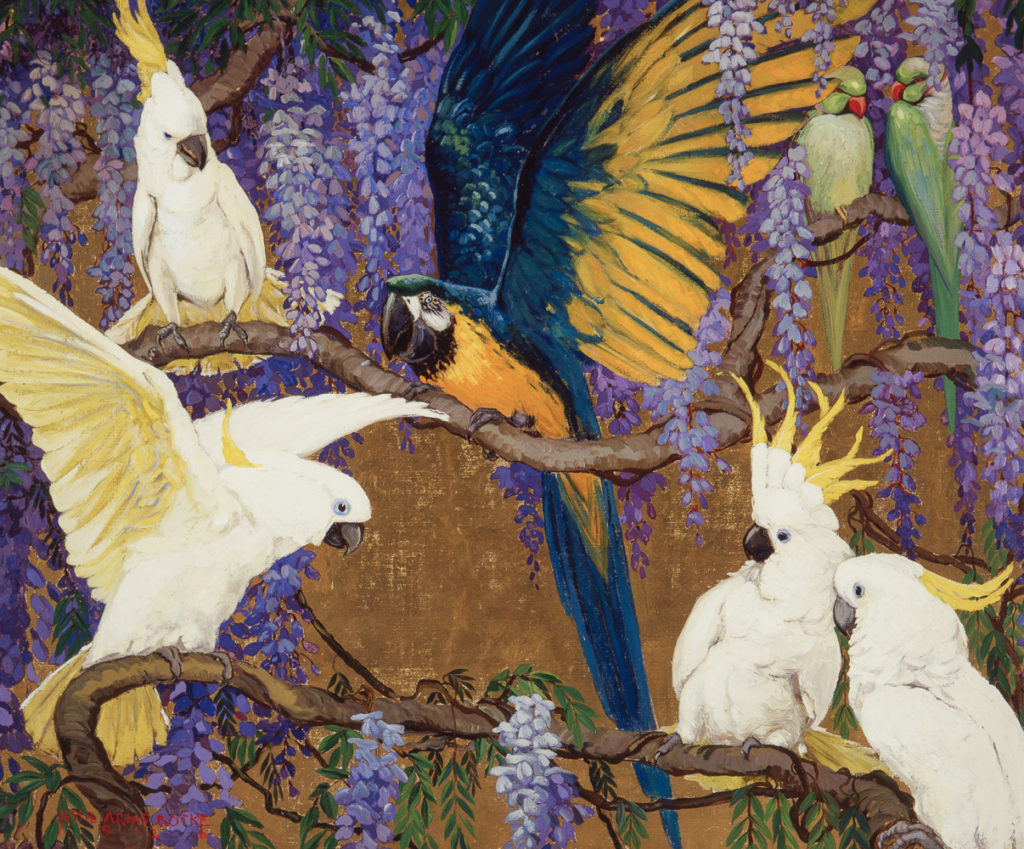 The Laguna Art Museum has installed many exhibits of works by 20th century artists. But “A Fanciful World: Jesse Arms Botke,” with paintings from the same period, differs from previous museum exhibits, which included significant pieces by Impressionist artists. While these Californian painters used broad brushstrokes and pure, vivid colors to depict the bucolic landscape of SoCal, many of Botke’s pieces draw inspiration from the Art Deco style, which is characterized by precise, linear and dynamic imagery and often by exotic subjects. His mainly figurative work is also influenced by medieval tapestries with their intricate patterns and abundance of flowers, foliage and trees, and by the age-old method of applying gold and silver leaf to paintings to add shine and sparkle.

Botke, born in Chicago in 1883, began taking art classes at the School of the Art Institute of Chicago in 1897, then attended the Art Institute full-time. While painting in her spare time, she worked as a book illustrator and interior designer for major companies in Chicago and New York, often designing tapestries and creating murals for hotels, universities and private homes. . She also traveled to Europe where she met the Spanish impressionist Joaquin Sorolla.

As Botke evolved as an artist, she became recognized for her remarkable ability to accurately depict birds of all kinds. And after moving to California with husband Cornelis Botke, she took advantage of the warm climate here, watching and photographing birds at the San Diego Zoo and her own ranch in Santa Paula. (Several birds she illustrated are now extinct.) Throughout the 1930s, 40s and 50s, when Botke was able to paint full time, his scintillating works of art were exhibited across the country in galleries and museums, particularly in New York, Chicago and Los Angeles. . In fact, she was blazing her own artistic trail. Inspired by her first professional works, by the different artistic movements that formed around her, by her travels and above all by her love of nature, she produced a unique work.

Illustrators throughout the ages have accurately drawn and painted birds, including John James Audubon. Yet Jesse Arms Botke’s paintings – which also faithfully depict birds – eclipse their work with his aesthetic perceptions and flair.