For many immigrants who come to the United States, starting a life and pursuing their dreams can be difficult. Not only are there language barriers and financial challenges, but immigration laws are tightening and the number of refugees allowed each year is decreasing. Yet a Colorado man wants to serve as a beacon of hope. Ali Ghassan was born and raised in Iraq. After discovering a love for art, he left his country of origin in the middle of the war to come to the United States. Here he worked to become a citizen and founded a classical art academy in Denver.

Ghassan was born in Babylon, Iraq – where his childhood passion was actually football and he dreamed of playing for international clubs. When he was just 14, he got injured from sports and was told he could never play football again. Ghassan then devoted all his energy to becoming an artist and went on to obtain a bachelor’s and master’s degree in fine arts from an Iraqi university.

Ghassan with one of his award-winning paintings.

Ghassan left Iraq a few times as conditions in the country worsened. He spent a few years in Egypt and Jordan. Yet as al-Qaeda grew stronger, the militant organization began to control more Iraqi cities, and killings became commonplace. It was then, in 2014, that Ghassan left Iraq for good and became a refugee in the United States. Conditions in his home country and surrounding areas were dire.

“I always wished that God created me as a dog because the dog was treated in a more respectful way than most humans,” Ghassan said. “We were harassed by gangs because we had no rights.”

Becoming a refugee in the United States is not a simple task. Throughout the 20th century, the United States welcomed approximately 100,000 refugees each year. After the September 11 attacks, admissions were virtually suspended. This number rebounded in 2008. In 2014, when Ghassan arrived, just under 70,000 refugees were granted asylum to enter the country. This number has dropped significantly since then.

At the time, Ghassan had entered an art contest in Minnesota, where he won first prize. According to Ghassan, this award brought him more recognition and opened the door for him to be accepted in the United States. Since then, Ghassan has worked tirelessly to pursue his American dream.

He was first inspired to create an art academy modeled on European Renaissance artists. The academies opened during this period aimed to train students in craftsmanship. Yet when Ghassan went to college for his fine arts training, he felt that the goal of college was simply to push students to graduate without actually teaching them formative artistic skills.

“The studios of great artists focused on studying art in a scientific way, like studying anatomy and color science,” Ghassan said. “These things have disappeared in the art schools of our time.”

Ghassan was then determined to open an art academy that would teach the same classical approach on which the art studios of the Renaissance period were based. It was then that he founded the REAL Academy of Art Colorado. Ghassan shared that the name REAL comes from the phrase “Renaissance Alive” which is meant to honor realist artists of the Renaissance.

Despite her determination, opening the academy was far from easy. Besides needing funds to start a business, Ghassan faced the challenge of not knowing English very well and even faced racism in the industry. Yet despite these hardships, Ghassan vowed not to view them as hardship.

“I just put my lens on the wall to look at it daily so I could hold on to hope and not despair,” Ghassan said. “I had perseverance, patience and hard work to achieve my goal that I had since childhood.”

Part of the reason Ghassan was able to overcome many start-up costs was because he did most of the manual labor when starting the academy. Instead of hiring contractors, he did the carpentry, electrical and construction work himself.

Once the art academy was finally opened to students – it became the first and only art school in Colorado to be certified by the Art Renewal Center – one of the world’s leading organizations dedicated to evaluating representative art schools. The school now has a full staff and board and teaches over 40 students.

Academy students are placed in small class sizes so they can receive individual instruction and learn in a supportive community. Anyone can learn at the academy – from expert artists to students with no experience at all. The program is based on four levels of study – students must master one level of study before progressing to the next. Students can study full-time, three days a week, or part-time. Ghassan has made sure that tuition at the academy is quite low compared to other art schools to ensure that anyone wishing to learn can do so at a reasonable cost.

As for Ghassan, he finalized his American dream by officially becoming an American citizen last June. His students and staff decorated the art academy in the colors of the American flag.

“My life was very difficult, I had to die anytime,” Ghassan said. “I chose to come to America because I love it and consider it my country where my ambitions have grown and flourished.” 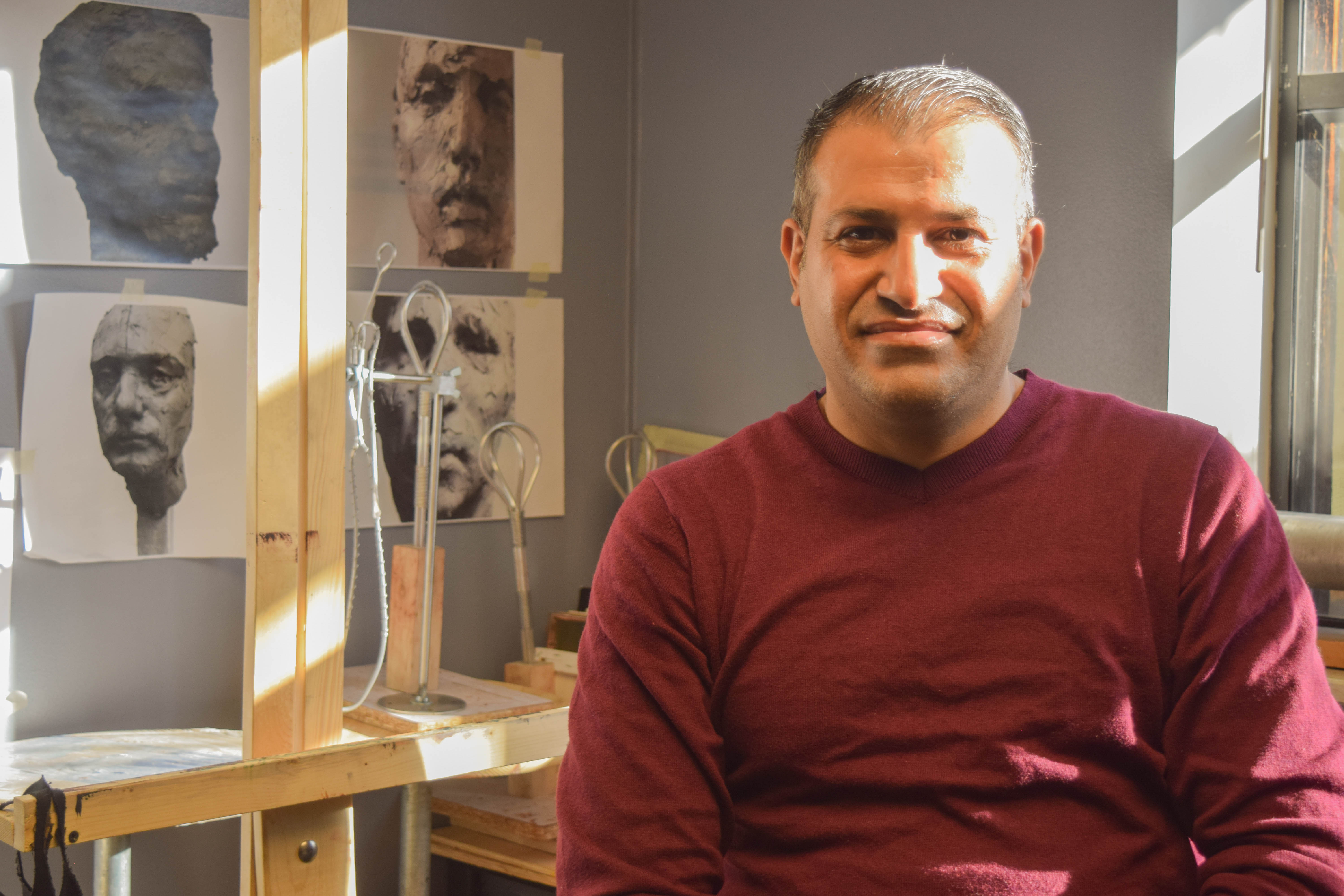 Ghassan hopes people will recognize the sacrifices made by early immigrants to America. He shared that he wants today’s generation to remember how their ancestors built this country. He also implores future generations to continue working to make the United States accessible to all so that more people can achieve their dreams. If Ghassan could get a single point across to those who hear his story, he would want it to be hope.

“Keep hopeful no matter how difficult it is and don’t despair no matter where things stand,” Ghassan said. “There is hope in life and difficulties are easy to overcome.”

The REAL Academy of Art Colorado is located at 2055 South Oneida Street #120, Denver. You can find Ali Ghassan on Instagram and Facebook.

All photographs by Barbara Urzua