An abstract tribute to an alternative music legend, Garnet Heart Lucinda Williams Vocals is part of Christina McPhee’s audiovisual show, Listening, at Osos Contemporary in San Luis Obispo, which will run until November 18.

“The idea was to make this evocation of what it feels like to hear his voice,” said the resident of Atascadero. “A color response to sound.”

His paintings/collages have layers, each built on top of the last. Starting with Jacquard, then pen and ink, then magazines, then painting, McPhee imagines the spatial landscapes stimulated by the music she listens to and puts them on canvas. This type of listening is the very essence of his show.

“You should listen so much that it’s like the soles of your feet have ears,” she said. “It’s this idea of ​​moving through the landscape and listening.”

But not just to music. Spoken words too. Her work connects performance, writing, text and drawing to both paint and camera. The exhibition at Osos Contemporary will include a curated playlist for gallery visitors to view his pieces, as well as video work to watch and listen to.

Its goal is for the gallery to do more than show art.

“I also want it to be a thriving community space,” he said, which is why he hosts an open studio and an art workshop every week.

Called the Lemonade Stand, Jacques opens the large space he rents in the JP Andrews building in downtown SLO on Monday, Tuesday and Wednesday evenings to those who sign up for the six-week workshops on the Osos website. Contemporary. All materials to create the art, high-resolution images of the artwork, website listing, exhibit, and pop-up reception are included in the cost of the workshop.

“It’s not really a class, however, I want to be clear about that. It’s a workshop, I just facilitate it. I provide the materials. I open the workshop. … I have all these easels, a complete kit for people to make art, I have all the different surfaces,” Jacques said. “If you’re a beginner, I’m happy to work with people one-on-one on my process, but this is not a course on how to create my art. It’s a workshop on how to become creative.”

Jacques believes that creativity is not necessarily something that can be learned. It’s something you just have to do, practice and experience. By opening up his studio to others, he hopes to give local artists the opportunity to do so. Artists who participated in the Lemonade Stand’s first six-week workshop will showcase the results of that work at Osos Contemporary on Thursday, October 27, during the Farmer’s Market from 6-9 p.m.

Over the past two decades, Jacques has traveled the country and focused on art. From his hometown of Columbus, Ohio, to Portland, San Francisco, Los Angeles, New York, Houston, Fort Lauderdale and a small town north of San Diego, he has worked with other artists, collaborated on the opening of galleries and perfected his art. with an emphasis on geometric shapes, color and linework.

“The broadest scope of descriptive words is abstraction, geometry, fine art drawing, precision – that’s a big focus of mine,” he said. “Over the years I painted, I just tried to get better at the craft, the precision. And do everything by hand, without using a computer.” 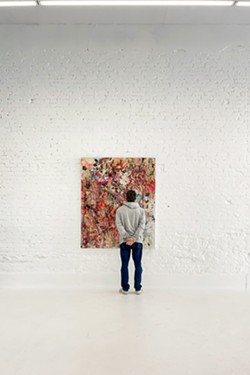 When he moved to San Luis Obispo with his fiancée earlier this year, Jacques said he knew he would need to find a studio where he could work on his art because the space they found to live was so small. He stumbled across 967 Osos St. with the help of a friend, and it was so big he felt the need to share it.

The mission of Osos Contemporary is to provide an accessible art space in San Luis Obispo, to foster interest in art among community members, and to create a space to recognize both emerging visual artists and artists established.

McPhee is an established artist who once came to Osos Contemporary to check out the grand opening exhibition. They started chatting and getting along, Jacques visited his studio and the solo exhibition, Listening, quickly came together.

Born in Los Angeles, McPhee moved to a very small town in Nebraska at the age of 7, where she began to draw and paint before attending art school at Kansas City Art Institute and graduating. her MFA from Boston University, where she studied under the late Philip Guston. She has taught art at the university level, had solo shows across the country, and done both film/video as well as painting/collage.

She said the abrupt transition from living in a big city to a rural childhood really influences her art.

“You’re looking at a different world, and you’re just like, where am I?” McPhee said, adding that this particular show partakes of the joyful, goofy spirit she found in LA, its pop architecture and big city space when she was young. “I was so fascinated… We did many, many road trips in the deserts and in the mountains. [I saw all this] crazy landscape and architecture, then we moved to Nebraska and it wasn’t there.” Δ