Press releases for art exhibitions, the handout by the gallery door: who reads this stuff? The full title of the exhibit here gives a sharp foretaste of BANK’s tough attitude to such releases:

status quo
We wanted to paint the walls pink and blue and have a golf cart in the gallery, but all we got was this graveyard of white cubes.

This bite is a warning that we are in for a litany of heavily astringent bent jokes.

BANK, formed in 1991, was a London-based collective (core members being Milly Thompson, Simon Bedwell and John Russell) who in 1998 came up with a project called Fax-Bak Service. They proofread and corrected more than 300 press releases and then faxed them back, with the corrections, to the galleries. BANK was pithy and, like 10cc, eager to make a mark: unsurprisingly, many galleries were neither impressed nor amused. A selection of Fax-Bak responses line the walls here in a grid that may or may not be a piss-take on Hanne Darboven’s concept sequences. BANK is wary of pretension, so how’s that for a grand comparison?

BANK had a sommelier’s nose for cant, BS, emphasis. We could annoy them by quoting Hélène Cixous. She once wrote, “Here is such a thing as marked writing,” but we can be sure she was not referring to homework given to striving schoolchildren. And that is precisely what BANK did by assigning marks out of ten to each press release. The original authors of these gallery missives (often void) were anonymous. Most were composed in coagulated slang, stuffed with incomprehensible jargon, and often heavily riddled and over-referenced. The names of French philosophers of the 20th century are very present. BANK thought they might be helpful/rude to galleries and so set themselves up as a ‘free advice’ outlet. They did so with a deliberate “holier than thou” tone and a conscious “hypocritical undercurrent,” caveats they admit in the press release for this Pin up. It’s not a bad example. I would give it 7/10. 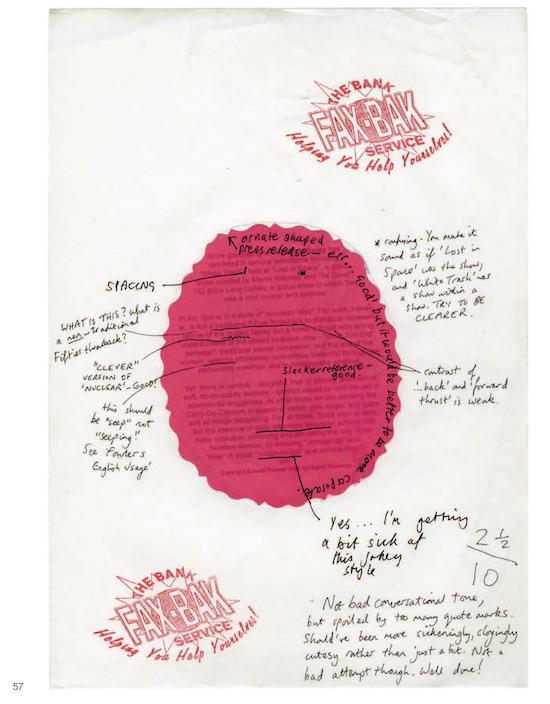 BANK’s scribbled comments are often juvenile and funny, though sometimes offensive – even hurtful at times, particularly if you were the recipient and/or had a twisted sense of humor. Here are some examples:

“BANAL, ILLITERATE AND LITTLE ADVENTUROUS. SHOULD GO FAR AS COMMISSIONER 2/10”

This appended to a statement issued by the Royal College of Art. Note the underline and capital letters to put more emphasis on it. Or how about:

“You make the exposition sound REALLY BORING 0.25/10″[>BANKseemstohaveitfor[>BANKsemblevraimentl’avoirpourFree time magazine as with:

“Too much like one Free time review, all too cautious. Keep trying!

And then there is:

Platitudes long favored by stunned professors litter the margins: “Gotta try harder” or “read more books.” Then there are creepy words spouting out, biting criticism such as “insane”, “verbiage”, “woolly”, “dull” and “prissy”. It’s easy to imagine the faces of galleries flushing with rage when they encounter a fax machine with this kind of abuse. Only a handful: we get 10/10 but it’s ironic on the title of the show: “Eliminate the Negative”. The worst gets 0.002/10. Do not go.

Modern French philosophers crop up again and again like with:

“A heady mix of O level Baudrillard and twee, a flowery breathless prose. That makes me sick.

Being a pedantic colleague, I am compelled to stress that this should be ‘O’ level. Another rebuke warns the writer that he should “try not to be so enamored with looking smart”. Best not to take this too personally. The insults pile up:

“There really is no excuse for this soft and meaningless journalism”

“You keep telling us things are important: I’m getting suspicious”

“I expect to be bored as shit”

“Wake me up before I finish, will you?” I’m almost asleep. »

The majority of BANK’s London-focused Fax-Bak avoid commenting on other artists, but are quite rude about Dame Rachel Whiteread calling her work “empty”. But there is pathos at work here too. The number of artists listed in these press releases makes you wonder, “Who?” or “Where are they now?” What happened to that berserker you met one night at the Pride of Spitalfields? And that guy telling you this or that is the next big thing because they’re “totally nuts”? So many artists long forgotten, not shown. Many galleries are also long gone. 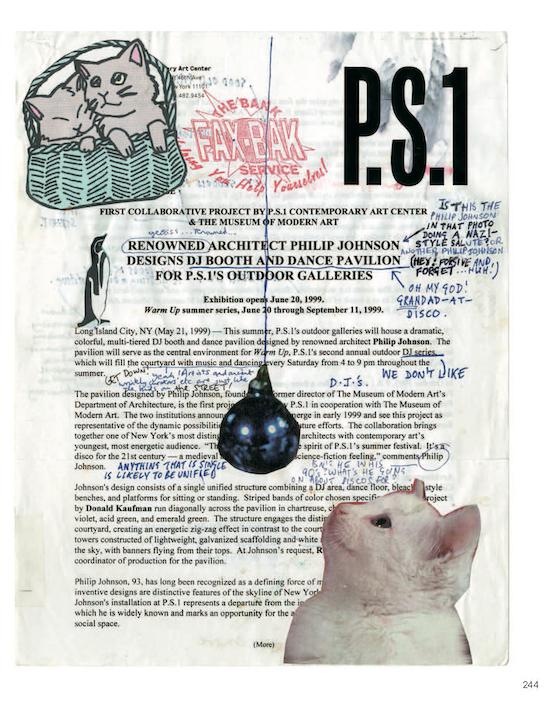 Then you ask the texts themselves: did the artist write this gibberish? A notable exception to serious censorship is Sean Landers. His blurb is really fun and well written. So, are we here witnessing an attack on the system or are we BANK hypocrites, endorsing the status quo? Answer yes to both. Eventually, and perhaps deliberately, the marks become as annoying as the constant reprimands of a bullying teacher. Corrections of linguistic distortions, tautologies and cliches drain the reader as much as the mistakes themselves. The effect is reminiscent of a collection of bad reviews, as with, say, Hatchet Jobs by Dale Peck (2004). You find yourself exhausted, bludgeoned.

What exactly do we have here? A work of art that features writing in regards to artistic writing. Brad Haylock and Megan Patty recently co-edited a book called Artistic writing in crisis. Dan Fox says there that “a lot of the new breed conservatives were terrible writers” and continues: “it became common to joke about not understanding what the press release meant”. Fox could talk about BANK’s targets, the “art drones that have been reviewing broadcasts in a deadly bloodless grind of language.” (Why use one word when you could use three neologisms and a tautology instead?)” Fox prefers those “writers who have cut their teeth on music, literature, or movies.” All right, bro.

One shudders at the idea of ​​submitting a text to the BANK for examination. Imagine a fact checker from hell to the New Yorker crossed paths with a terrible English teacher – the one who threw a feather duster at your head for getting the semicolons wrong. Ironically, this show is quite useful for the freelance writer. BANK teaches tough lessons on how do not for writing. You might consider Fax-Bak to be fun: but be careful. BANK insists that “playfulness” as a word is “forbidden”. Perhaps they would prefer to use the word “playful”. To joke! Given all of the above, I’ve gone through this review a hundred times or more and hope, at the risk of being ungrateful, that there aren’t too many mistakes. Rating for the show 6/10. Proleptic note for this review 4/10. Always optimistic.

BANK: Status quo, we wanted to paint the walls pink and blue and have a golf cart in the gallery, but all we got was that this graveyard of white cubes is at Galerie Neu, Berlin, until March 5