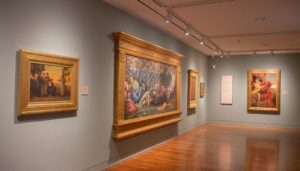 Part of the Delaware Art Museum’s Pre-Raphaelite collection will travel to Tate Britain for a show that will then travel to Delaware. Photo by Carson Zullinger

An exhibition from the Tate Museum in London will travel to the Delaware Art Museum in October 2023.

This is a major blow for the institution of Wilmington, which will be the only stage of the exhibition in the United States.

The Tate exhibition “The Rossettis” will focus on the family of British Pre-Raphaelite painter Dante Gabriel Rossetti and feature several pieces from the Museum of Delaware’s collection of Pre-Raphaelite art.

The show will take place in London at the Tate Britain from April 6 to September 24. He will then travel to Delaware, where he will close the Delaware Museum’s Year of the Pre-Raphaelites, which has just begun.

The Delaware museum’s new Pre-Raphaelite curator, Sophie Lynford, told patrons on Tuesday night that Tate curators had told their counterparts in Delaware that the Tate exhibit could not be mounted unless it could borrow works from Delaware.

Triumph of the Delaware Museum of Art

Being able to host the Tate show is a crowning achievement for the Delaware Art Museum, which not so long ago was essentially blackballed by the museum world for selling artwork to erase the debts. For a few years, she couldn’t borrow any artwork, and no one asked her to borrow her artwork.

Then prominent museums started doing the same a few years later, and suddenly the Delaware museum looked like a forward-thinking institution, wisely making sure it was there to serve the Delaware community for another century.

DelArt officials expect the Tate show to generate a lot of excitement in the region and beyond.

Lynford said the museum is already getting inquiries from as far away as California about when the Tate show will be in Delaware so they can plan their trip.

Full details will be announced soon, a museum official said.

The Museum of Delaware’s Pre-Raphaelite Collection is one of its three main collections. Considered the largest collection of Pre-Raphaelite art outside of Britain, the museum’s collection began with works collected by Wilmington Mill owner Samuel Bancroft and donated to the museum in 1935.

The Pre-Raphaelite artists were a group of artists and writers, including Rossetti, who disdained the Royal Academy’s emphasis on art in the holier-than-thou style of Renaissance painter Raphael. They were inspired by the work of the medieval period – before Raphael – and focused on contemporary life.

The group was active from the mid-1900s and their life and work followed the Industrial Revolution and the rise of the Arts & Crafts movement.

The museum has already begun celebrating its Year of the Pre-Raphaelites. 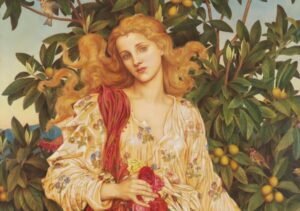 An exhibit opening Saturday at the Delaware Art Museum will feature the work of painter Evelyn De Morgan and the pottery of her husband William.

A recently opened exhibition, Forgotten Pre-Raphaelites, features more than 40 works of art from the museum’s collection that are rarely displayed. The works are by overlooked artists who experimented with Pre-Raphaelite themes and techniques, including the art of American Pre-Raphaelites and the work of female artists.

On Friday, A Marriage of Arts & Crafts: Evelyn & William De Morgan, makes its American debut. It will take place from Saturday October 22 to February 19, 2023.

The exhibition is the first retrospective of Arts and Crafts potter William De Morgan (1839-1917) and Pre-Raphaelite painter Evelyn De Morgan (1855-1919).

A Victorian power couple, they moved in influential cultural circles, shared an interest in spiritualism, and engaged with the social issues of their time.

Even so, both were unrecognized and uncelebrated until recently.

The exhibition will include William’s brilliantly colored tiles, pots and plates and Evelyn’s richly symbolic paintings.

DelArt will host a talk on Friday, October 21 at 5 p.m. by Sarah Hardy, Curator of the De Morgan Collection. Special guided tours of the exhibition are available weekly on Saturday afternoons.

Betsy Price is a freelance writer from Wilmington with 40 years of experience, including 15 at the News Journal in Delaware.